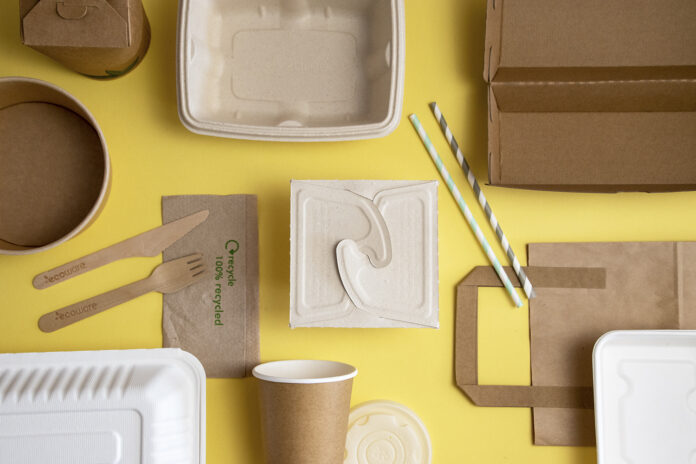 A low-cost manufacturing process is used to obtain and create the raw ingredients – generally fossil-based polymers. Little consideration is paid to the eventual disposal of these materials after they have served their purpose. This item is likely to end up in a landfill, or at the very least, in a low-value recycling stream contaminated with food. This model is a sham, both literally and metaphorically! Compostable packaging materials are better for the circular economy because of their design. Biodegradable packaging may survive beyond the garbage phase and return to the resource stream as compost, which improves the land and removes carbon from the atmosphere simultaneously.

Due to food contamination, typical single-use food service products are generally impossible to be recovered or repurposed. The standard garbage containers include both packaging and organic food waste. Packaging that can be composted reduces the environmental effect of organic materials that would otherwise end up in a landfill. One million metric tons of organic waste are generated by the food sector each year in Australia alone, with the majority of that trash ending up in landfills.

Methane is emitted into the atmosphere when organic waste in landfills decomposes due to a lack of oxygen. A country’s entire output of gases from landfills would rank third in the world after China and the United States if methane were taken into account. Composting your food waste and using biodegradable packaging effectively prevent climate change and reduce the carbon footprint. Because of its carbon-sequestration properties, composting is an excellent way to keep greenhouse gases out of the environment.

Moving away from plastics and toward the future with plant-based products.

In addition to being biodegradable, plant-based products are also renewable. Bagasse, for instance, is a byproduct of the sugarcane industry and is formed from sugarcane pulp. This food service business may benefit from this material before it is recycled, composted, and returned to the earth as nutrients for new plants.

For food service, why is biodegradable packaging ideal?

Food residues contaminate most of the packaging used in the food service business. In the case of fiber-based goods, recycling is almost impossible. Because scraping food trash from the packaging into a separate container is not the norm, both end up in landfills.

After dinner, if you serve food in biodegradable containers, everything may be thrown away in one bin—the organics bin. More food waste may be captured, and contamination in other recycling streams may be reduced using this method. More than 100,000 metric tons of organic waste produced by Australia’s food service and hospitality industry could be composted, and an estimated 10,000,000,000 throwaway food service items could be recovered and recycled simultaneously.

There are several ways in which compost is advantageous to soils, plants, and animals:

Overpopulation and pollution are putting a strain on the world’s ecosystems. Composting is one method that may help restore ecological balance, despite the bleak image painted by biodiversity surveys. Compostable packaging is the path of the future for the food service business. Whether for environmental reasons like reducing greenhouse gas emissions, improving soil health, or combating plastic pollution.