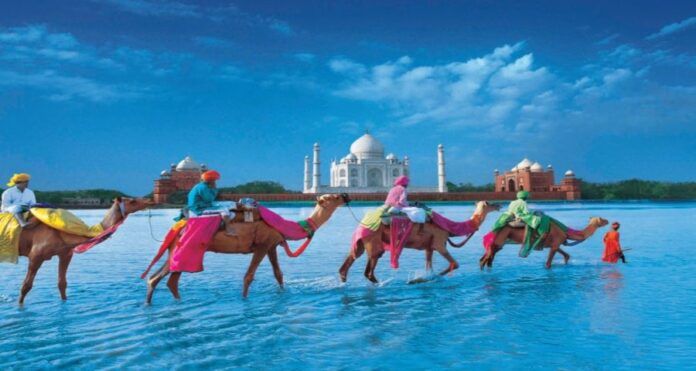 India is divided not just by culture, but also by languages. Aside from its unique topography, the country is a fantastic tourist destination with a varied selection of attractions. Throughout the Indian subcontinent, you may find everything from beaches to mountains. The country offers some amazing wildlife and vegetation. There are several excellent locations to visit in the area that are suitable for individuals of all ages and ethnicities. There are countless buried diamonds in India that have yet to be unearthed. If you have a decent CIBIL score, you may easily visit these areas by taking out a personal loan. The best 5 tourist places to visit in India are as follows:

Do you wish to see India from a different perspective? Travel to Mumbai, a dynamic coastal town populated by ultra-wealthy entrepreneurs and Bollywood’s most famous stars. Visitors will never be far from a five-star hotel or a gourmet restaurant in this wealthy metropolis. Even if such activities are beyond your financial range, a stroll down Marine Drive will make you feel like royalty as you admire the scenic waterfront and sumptuous Art Deco skyscrapers.

You may encounter a more authentic, local side of Mumbai in the bustling “Thieves Market” or at the Churchgate railway station, where hundreds of thousands of handcrafted lunches are packed and delivered to the city’s office workers every day. Make a day of it and explore the 2,000-year-old Kanheri Cave sculptures at Sanjay Gandhi National Park.

Rajasthan is a state in northwest India that borders Pakistan and is home to the Thar Desert. Rajasthan boasts some of the most beautiful places to visit in India, whether you are interested in Rajput heritage or the Aravallis Mountains. The Pink City, or Jaipur, is Rajasthan’s capital and an excellent place to begin your adventure.

Among the city’s many architectural beauties are three forts, many temples, and the beautiful City Palace. Jodhpur, often known as the Blue City, is the gateway to the Thar Desert. Jodhpur, situated in Rajasthan, is home to the famous Mehrangarh Fort and is well worth a visit. If you have a decent CIBIL score, you may visit Rajasthan without breaking the bank. As a result, you should apply for a personal travel loan.

Varanasi is one of the world’s oldest living cities, dating back more than 3,000 years. Varanasi, in North India, on the banks of the Ganges River. It has long been an important academic centre as well as a prominent pilgrimage place for many Hindus. Varanasi is considered sacred by Hindus, Jains, and Buddhists. Because it is believed that dying here frees one’s soul from reincarnation and bathing in the Ganges wipes away one’s sins. Varanasi offers sights and experiences not found anywhere else on the earth. Varanasi is known as the “City of Temples” because of its hundreds of temples. Among the most prominent are Shiva’s Kashi Vishwanath Temple, the Durga Temple, and the Sankat Mochan Hanuman Temple, which is famed for housing many monkeys.

The ghats are a set of steps leading down to the Ganges River. Many people come here to bathe, and it is one of the city’s most well-known landmarks. Dashashwamedh Ghat is the most ancient and significant ghat. The Manikarnika Ghat is a burning ghat where Hindu cremations and death anniversary ceremonies are often performed. Yoga, shaves, and massages are among the other services available. The best way to see the ghats is to take an early boat cruise around sunrise. Varanasi is well-known for its silk weaving, and there are several stores and marketplaces selling silk sarees. The marketplaces sell handicrafts in addition to silk sarees and scarves.

If you visit Northern India, you will almost certainly visit Delhi, the country’s capital. The sprawling city is home to several districts and is one of the world’s oldest cities. The Red Fort, also known as Lal Qila, was built in the 17th century and is one of Delhi’s most renowned tourist sites. The Red Fort is made of sandstone, and you may go through the Lahore Gate, the bazaar, the diamond palace, and even the sultan’s former residence. While in Delhi, make time to see the city’s renowned museums and religious institutions.

Rishikesh has been on the radar for spiritually minded travellers since the late 1960s, when the Beatles visited Maharishi Mahesh Yogi’s ashram, now an abandoned complex that has become an off-the-beaten-path tourism attraction for enthusiasts.

The village is nestled in the Himalayan foothills on the banks of the sacred Ganges River and is a famous yoga and pilgrimage destination. Participate in the activities or simply enjoy the sounds of the temple bells and the vistas from Rishikesh’s two suspension bridges, which are regularly patrolled by aggressive monkey families. Keep a safe distance.If you enjoy travelling, these are the top five greatest destinations to visit in India. You may visit these areas and have fun without breaking the bank by asking for a personal travel loan. A personal travel loan will provide you with immediate access to finances, allowing you to spend the money anyway you see fit. If you have a low credit score then you can follow the steps on how to improve CIBIL score and then apply for a personal loan. However, in order to get authorised for a personal loan, you only need a high CIBIL score. A strong CIBIL score helps you appear creditworthy to banks, and banks feel you will not default on the loan. Banks are willing to lend to you if they feel you will return the loan on time and will not default. Hence, they are most likely to approve your loan applications.

A Vacay at Daytona Beach Means Fun, Food, and Frolic!